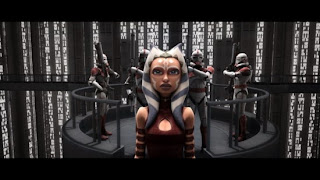 The Clone Wars animated series had the rare combined story-telling challenge of being an in between chapter to a prequel shared universe of sci-fi tales. It's a rare undertaking to produce a teevee series in which one of your central hero's will soon-after go crazy and help kill all of his friends and comrades and help to spread evil through-out the universe. The series has built itself to being not only worthy of it's legendary Star Wars roots, but I think it's quite often better then the motion picture adventures. I've been enthralled and on the edge of my couch watching this fifth season evolve and head towards its conclusion. I'm glad I finally got all caught up, and am looking very forward to watching the final season on Netflix.
Posted by batturtle at 10:39 PM