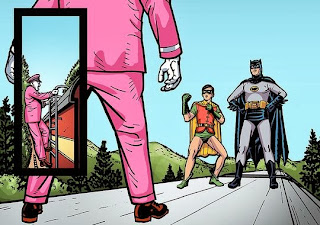 News leaked today that Kevin Smith is co-writing a Batman 66 / Green Hornet mini-series, which will be illustrated by Ty Templeton, one of my all time favourite comic artists. There was a time in the days of Frank Miller's Dark Knight and the Micheal Keaton / Tim Burton big screen incarnation of the character that I did not appreciate the Adam West era of the Batman. Now I think that it's pure television perfection and comic book brilliance. I have great anticipation that the classic series is finally being released onto dvd/blu-ray sometime in 2014, I look forward to having that on my shelf.

I also like when there is any kind of big push and media attention put towards a comic that is actually appropriate for a kid to read. Kid friendly comics are a sadly minuscule happening in this day and age.
Posted by batturtle at 3:01 PM