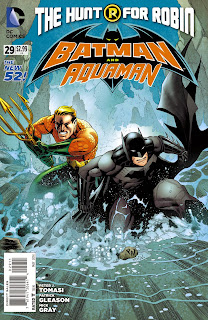 Issue 29 of 'Batman and...' has brought The Hunt For Robin to a Batman and Aquaman team-up as they clash against the forces of Ra's al Ghul. Peter J Tomasi and Patrick Gleason continue to tell great Bat tales, and have expertly rolled with the punches of actions in a shared universe taking your book in an unplanned and unexpected direction. Grant Morrison killed off Robin in his Batman Inc comic...which of course means that Robin has to be dead everywhere else in the DC Universe too. They've taken the Robin-less 'Batman and Robin' series and have molded it into a fun team-up book. At the same time, the creative team is driving their story along in the stubborn direction of seemingly trying to get Damian Wayne back from the dead and return the title to its traditional duo. Part of me thinks that they can't be going for the obvious route of bringing back Damian via a lazarus pit of immortality. Especially since that's how Jason Todd / Robin returned from the grave. The other part of me doesn't care how lame the story point is...I just want Damian back.
Posted by batturtle at 3:54 PM