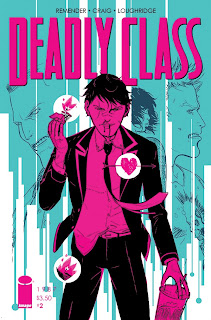 The 2nd issue in the Image publisher comic Deadly Class was just as excellent as the premiere issue was. The story follows a young suit clad punk in the 1980's as he makes his way through a villainous version of a Charles Xavier's School for Gifted Youngsters.

Writer Rick Remender brought up the books letters page pointed out that the joy that writers and artists get from creator owned work is that they can do whatever they want. A reader doesn't have a decades long affection for these new characters and tales, and there's no continuity rule-book that a creator has to work under. When Remender turned The Punisher into a Frankenstein style monster (which was awesome!), that garnered him a lot of geeky hate mail I'm sure. While working on books like Captain America or Venom can be a lot of fun and very rewarding I'm sure, I bet there's also a lot of editorial mandate from the Marvel / Disney powers that be.

Creators are doing some great stuff for Marvel and DC, but more and more I think their hearts belong to doing original comics outside of the Big Two publishers. Grant Morrison has left behind Batman to do his own work. Matt Fraction is doing an amazing job on Hawkeye. I bet if he could only pick one book to write though, that he would pick his creator owned work (and also amazing) Sex Criminals. Jonathan Hickman has recently come off arguably the best run on Fantastic Four since the original incarnation from Stan Lee and Jack Kirby. Yet, what he's doing with East of West might just end up being even a greater accomplishment.

As long as these indie books continue to get support, we'll see more of the high quality same filling the comic store shelves and websites. So, if the mainstream norm leaves you wanting more, be sure to get out there and support the lil' guy. I for one want a whole bunch of more issues of Deadly Class.
Posted by batturtle at 11:57 AM