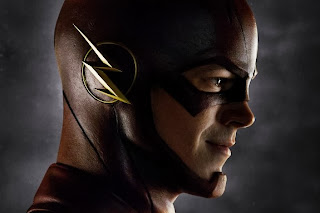 I kinda hated Smallville. Every once and a while I would try to give it another chance when they had an extra special episode. I'd tune in when Christopher Reeve was on it, or characters I love like Cyborg or Martian Manhunter. Nothing about this non-Superboy show could win me over.

I didn't want to give the more recent DC Comics teevee series Arrow a chance. I thought it was lame that they took the Green out of the equation, and figured that all we were going to have was another Smallville on our hands here. Alas, the adventures of the hunky Greenless Arrow left me shocked at his goon killing ways, and unimpressed.

None-the-less, this picture of The Flash from the upcoming teevee series looks really cool. Third time's a charm?