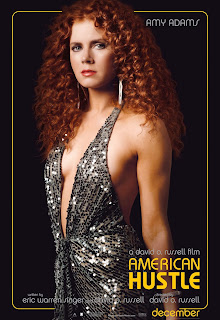 I don't want to seem crude or chauvinistic, but as the end credits began on American Hustle, I leaned over to my girlfriend and whispered "Amy Adams side-boobs deserved an Oscar nomination for that performance". They were on display through-out, and I couldn't help but continue to help how her wardrobe worked. I have been informed that lots of tape and glue were probably involved. Well, besides for that, the movie itself was a lot of fun. It's an all-star packed heist story with a very Scorsese kinda' vibe to it, and it's jam packed with a ton of great music. Any movie featuring Jennifer Lawrence belting out a rendition of Live and Let Die has to be pretty good right? It didn't win an Oscar for any ten of its nominations, but I think it's yet another of the highly praised movies of 2013 that is deserving of its accolades. American Hustle screens at the Mayfair tonight, and until Thursday April 3rd.
Posted by batturtle at 12:22 PM