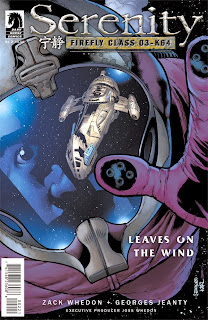 I have no problem with someone getting a gig via nepotism, as long as they then prove themselves with some talent to back it up. At first glance, Zack Whedon being put into the writers chair on the new Serenity mini-series from Dark Horse Comics might seem a bit suspect. Zack is of course the brother of Serenity creator Joss Whedon, so not difficult to guess who recommended him for the job. Zack has a resume built up to prove that he can stand on his own in the scribe department though, having contributed to shows like Deadwood and Fringe, and written comics based off of The Terminator franchise. He of course also collaborated with his brothers Joss and Jed on the Doctor Horrible's Sing Along Blog phenomena.

I hope that this post-movie Serenity story-arc becomes an ongoing series. Everyone involved is doing a great job and doing the beloved cult teevee series and movie proud. I have missed these characters dearly. Never say never, especially in this day and age of geek media supremacy, but I don't think we'll ever see these characters in live-action movie or teevee form again. Getting more great comic book stories is just as fine by me though.
Posted by batturtle at 2:21 PM