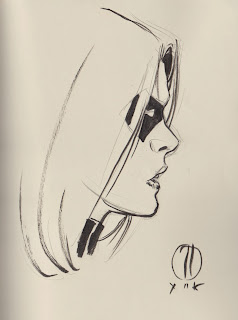 We hopped the bus from central Ottawa out to the EY Centre to attend the third and final day of the Ottawa Comiccon. My favourite part of a Comiccon invading a city is the costumed fans, and how their wardrobe must confuse people who know not that a comic book convention has invaded their city. On our bus there was a Ghostbuster, Mario, Luigi, Captain Marvel, Kaylee from Firefly, and some anime influenced costumes of unknown origin to me. It must be quite the interesting and confusing sight for non-geek city residents.

Working the comic con floor and attempting to get one's comics into peoples hands makes for an exhaustive weekend. It was an excellent weekend though, and Zomkeys was all sold-out well before the con came to a wrap. On top of that, a number of folks came around the table asking for copies after they were all gone. A fine ego boost all in all. Plus, I found a Buckaroo Banzai movie adaptation comic, and my pal Marco Rudy whipped up a quick Liberty Belle sketch for my sketch-book collection.

Posted by batturtle at 9:55 PM