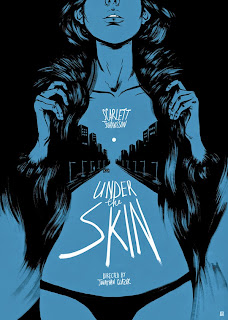 I instantly became a fan of Scarlett Johansson after her performance in 2001's Ghost World. A fairly impressive and diverse track record of movies followed, including the like of Lost in Translation, Spongebob Squarepants, The Prestige, Match Point, Her, and of course the batch of Marvel movies that she is in the midst of.

We have one of her latest efforts, the sexy sci-fi thriller Under the Skin, screening at the Mayfair starting on Friday night. I posted this info onto the Mayfair Facebook page, and a person commented with more then a lil' bit of snark that the movie doesn't seem very original. Elsewhere, I heard negative remarks that the movie wasjust a rip-off of the movie Species.

What people seem to forget is that nothing is original. Just because a sci-fi evil alien movie has a female,it doesn't mean that it was ripped off from that other sci-fi evil alien movie with a female lead. And, even if something gets inspiration from something else, it doesn't mean that it's bad. Quentin Tarantino doesn't have an original bone in his body. Everything he's ever done takes large amounts of rip-off inspiration from his favourite things. He seems to be doing ok for him self though.

Under the Skin, from the director of the excellent Sexy Beast, has its Mayfair premiere on Friday May 30th at 8:45pm. Even though it isn't the first, and won't be the last spin on an alien invasion tale, I am very excited to check it out.
Posted by batturtle at 1:57 PM