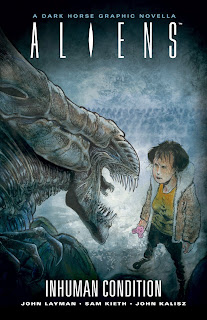 I have been a fan of comic artist and writing genius Sam Kieth forever. Or if not forever, at least since his co-creation of The Sandman, and his Aliens and Marvel Comics presents work of the early 1990's. And of course, his bizarre and beloved work on The Maxx, which even when I wasn't quite sure what the hell was going on, I still loved dearly. A rare Maxx action figure and an audio-cassette radio-play read-along version of the first few issues of The Maxx are two of my prized possessions.

Sam Kieth's reunion with the Aliens comic book universe is as great as one might hope. If you are a fan of the Aliens movies, but have never checked out a comic version of the mythology, this novella sized story is a great first step into the expanded universe mythology. If you are a fan of Sam Kieth, then I'm sure you don't need any further pressure from me to read Aliens: Inhuman Condition.
Posted by batturtle at 9:35 PM