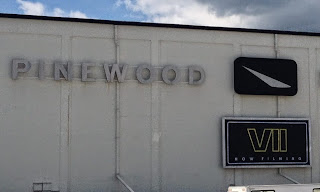 The new Star Wars movie is filming right now at Pinewood Studios in the UK. I want to go to there. Often the anticipation of a movie beats out the quality of the movie, but I do enjoy the months and years of contemplation and hope and rumour and speculation leading up to an epic franchise motion picture. I think Disney has done a spectacular job with their acquisitions of The Muppets, Marvel and Pixar, and I have high hopes for their handling of the Star Wars universe as well. Living in a world with more Star Wars on the horizon is a good thing. I will be counting down the days until a 20th Century Fox-less drum-roll of a Star Wars arrives at the end of 2015.
Posted by batturtle at 10:13 AM