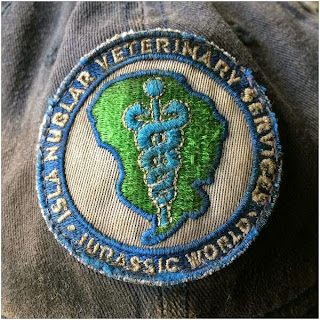 The best movie geek related aspect to all this Twitter/Instagram / Facebook stuff is that people making movies important to geeks make use of it. Your JJ Abrams', Edgar Wright's, Joss Whedon's and now it looks like Jurassic World director Colin Trevorrow, all make use of the interweb to communicate with and tease the fans with info.

So, here we have a veterinary patch from an employee of Jurassic World. The picture was put onto Twitter by the director. It's the perfect kind of look behind the curtain that I love. I don't want to know what dinosaurs are in the movie yet, I don't want the ending spoiled, but seeing a patch like this gets me for excited at what is to come.

I've clearly learned nothing from Michael Chrichton's cautionary don't mess with nature sci-fi tale, 'cause if there was an option to bring back dinosaurs, I would vote yes. If they said that we are inexplicably going to recreate a bunch of the most dangerous and ferocious ones along with the tame easy to handle ones...I would still vote yes. I feel the same about dinosaur movies. I don't care if they're good or bad, as long as there's a dinosaur in it I am all in. I hope that the long delayed fourth Jurassic film makes a truck-load of money and instigates an onslaught of dino-sequels.
Posted by batturtle at 3:06 PM