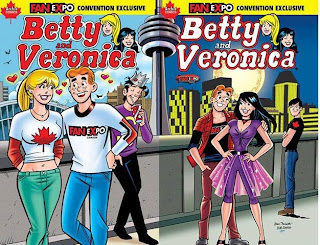 Sometimes I'm a sucker for limited edition things. If it's a tin lunch box or a special edition blu ray or an art print that has a number / then another number, that just might push me over the top in whether I will purchase it or not.

At the same time, I have never been a great fan or supporter of the variant cover craze that popped up in comic books in the 1990's, and has made a comeback the last few years. I am not going to buy six different versions of the same book just because they have different artists. Or, if it's a comic that comes bagged because there's a trading card or something included, I'm not going to buy multiple copies to keep one pristine. I'm just going to buy one copy and open it up. I haven't even put a comic in a poly-bag and a board in years. Take that mint condition!

I was none-the-less suckered into getting a couple of Archie variant exclusives at Fan Expo this past weekend. I faltered because I wasn't paying attention, I thought that it was at least two different Archie offerings. It was in fact the same issue of Betty & Veronica #267, just with a pair of different Canadian themed covers. The interior has nothing to do with Canada either, it is a rather strange tale with Betty & Veronica re-imagined into a Little Mermaid style tale.

I find myself becoming more and more a fan of Archie. I'm especially appreciative that they introduce characters like Kevin Keller, that they're putting out a kid friendly super-hero line, and that they continue to do weird things like their soon to be published zombie horror book featuring the Archie characters. Hence I'm not too upset about being tricked into buying two copies of the same book. Plus they claim that there were only a mere 400 of each cover produced. Collector's items! I will bag and board them and resell them one day and be rich.

Posted by batturtle at 2:14 PM