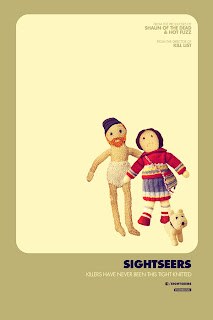 An indie romantic murder spree tale is not for everyone. Edgar Wright's name being attached to a project has never lead me wrong before though (Spaced, Shaun of the Dead, Hot Fuzz, Scott Pilgrim, Attack the Block), and his executive producer credit on The Sightseers continues that streak. This supremely dark comedy drama had my enthralled from start to finish, and when the end title credits began I was sure that I had just seen what was easily one of the most impressive movies of the year.

The Sightseers screens at the Mayfair tonight at 7:00pm, and Wednesday August 14th and Thursday August 15th at 9:15pm.
Posted by batturtle at 9:20 AM