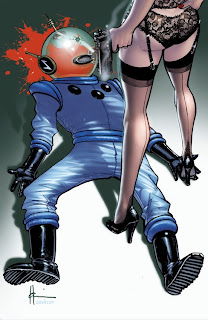 I'm pretty sure that Image Comics is the best publisher in the medium. They are not the best-selling of course, DC and Marvel have the strangle-hold on the #1 and #2 parts month to month thanks to their deep base of world famous iconic super-hero's. In terms of quality stories and art and immense diversity, I do not think that Image can be beat.

Th latest Image book that I have fallen in love with is Satellite Sam, which has it's first two issues currently available from comic shops or in digital form from Image's website. I took notice of the comic due to it being written by Matt Fracton (who writes Hawkeye, whish is by far the best comic that Marvel puts out) and drawn by Howard Chaykin (who is easily one of the greatest comic artists of all time).

As aforementioned, I have grown to trust the folks at Image to put out quality product, so I didn't even really research what th book was about beyond it's creative team. From the cover, I had thought it was some kind of sci-fi tale. In fact, it is even cooler then that. It is a story from the pioneering days of television, a company producing a live bad sci-fi series, and the murder of one of the cast members. It is even presents in glorious black and white, and it is beautiful. Check out Satellite Sam, another great example of non-super hero storytelling in the comic book form.
Posted by batturtle at 11:45 AM