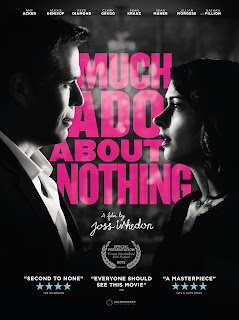 Joss Whedon's adaptation of Shakespeare's Much Ado About Nothing into a modern day cinematic tale has been greatly anticipated and highly anticipated by Mayfair patrons. It finally hits the Mayfair's screen tomorrow night.

The movie features a who's who of actors from the Joss Whedon teevee and movie repertoire, with actors from pretty much every project he's worked on over the past seventeen years or so (Buffy, Angel, Firefly / Serenity, Dr Horrible, Dollhouse, Cabin in the Woods, and The Avengers). If by some crazy chance that you've never heard of Joss Whedon, but are a Shakespeare nerd instead, this is a great jumping on point to bear witness to his great talent at writing for and directing a large ensemble cast.

Plus, the movie might be in the trivia and record books as the biggest financial turn-around for box office blockbuster to tiny financial return. The Avengers made a billion dollars and stands as the third biggest box office movie of all time. Much Ado About Nothing was shot for no money and barely found distribution and a theatrical presence. A supremely minute fraction of the audience who watched the Marvel heroes save the world will then turn around and partake in a modern day, black & white, no-budget retelling of a classic stage-play. Their loss is the Mayfair's gain. I am equally as excited to see this movie, that was shot at the director's house, as I was his previous big budget summer blockbuster.