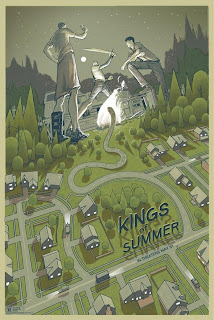 I saw a pair of great films tonight at the Mayfair. In fact, it may have been the best crowd reaction for back to back films that I've seen all year. Both films had the patrons laughing through-out, and both garnered a big round of applause at their conclusions.

The Kings of Summer is an immensely impressive feature directing and screenwriting debut. The story follows a trio of teenage boys who run away from home to live of the land like real men and build their dream-house in the woods. It features some great new-comer performances and the brilliant fatherly comic stylings of Nick Offerman. The movie stands shoulder to shoulder with the legacy of coming of age tales the like of Stand by Me, Breaking Away and even the John Hughes catalog.

The second film on the agenda was This is the End, a Canadian content filled comedy featuring countless death, rampant destruction and no less than the apocalypse. If you like the guys in this movie, which I do, you will very likely laugh from start to finish. It's filled with a truck load of great cameo's, and does not pull it's punches in terms of gore, scares and monstrous demons either. It's a horror movie that just happens to be hilarious, with the added funk gimmick that everyone in it is playing exaggerated nut-job versions of themselves.

Do yourself a favour and catch both of these movies. We screen them again at the Mayfair on Thursday August 29th - The Kings of Summer at 7:00pm and This is the End at 9:00pm.
Posted by batturtle at 11:43 PM