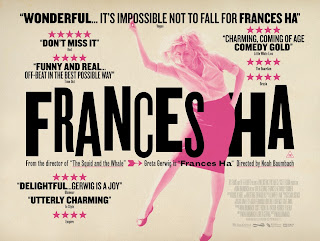 Frances Ha is not for everyone. I have a feeling that a few friends of mine who aren't a fan of Woody Allen dialog or the uncomfortable side of the work of Ricky Gervais and Stephen Merchant would not be enthralled by these cinematic stylings. In fact, the sticking of a foot in one's own mouth and digging a deep hole of conversational embarrassment that happens often in the movie, might make some flinch and cringe in the same manner as a cowardly type watching the scariest of horror movies.

I, on the other hand, rather loved co-writer and star Greta Gerwig's take on the struggles of life in NYC from the female perspective. Her Oscar nominated writing partner Noah Baumbach directed the film, and it features some beautiful black and white cinematography. Makes me wish there were more films still shot in black and white, especially ones filmed in NYC.

Take a chance on what wraps up to be a delightful and quirky character driven comedic drama with Frances Ha - screening tonight (Wednesday August 6th) and tomorrow (Thursday August 7th) at 9:30pm at the Mayfair .
Posted by batturtle at 10:34 AM