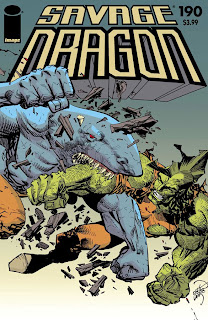 I have been reading Savage Dragon since 1992, meaning that I have been consistently reading the universe from the imagination of Erik Larsen every month to month and a half for well over two decades. That's a rather staggering statistic, especially considering that he has written, drawn and supplied the cover for every single issue. That just doesn't happen now-a-days. When Image Comics was founded, it was meant to be for creators to work on their own characters. Erik was the only one to actually follow through with his commitment to his comic book world.

Savage Dragon has been a cop, a super-hero, an outlaw, a father, and he's run for president. He's met up with Hellboy, the Ninja Turtles, and Superman, he's even battled the Mars Attacks aliens. Another fun gimmick is that the comic has aged in real real time, a true rarity in the genre. All of the characters have aged two decades, just as it's readers have. The comic has consistently featured amazingly imaginative plot-lines, stories not afraid to hit the character with giant universe shaking changes.

The latest issue, Savage Dragon #190, is currently in stores and online. If you go and get it in a comic store, you can get the limited edition Archie Digest sized issue...I got both versions.
Posted by batturtle at 12:59 PM