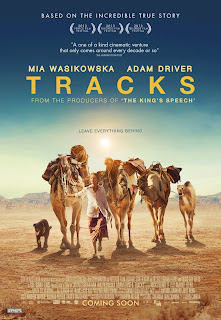 On a day off in-between a marathon through the trenches of a music festival gig, I had my first day off in an age yesterday. So, of course,I spent that day off first catching up on some Mayfair Theatre related work. Then, I went to see a movie at the Mayfair.

Tracks is an inspiring human spirit drama based on the true story of a young women and her adventure trek through the wilds of Australia with only her dog and camels in tow. Like all brave adventures, it was a dangerous and rather insane undertaking that very likely could have killed her. The movie is a fascinating look at what on can accomplish, and it you don't get choked up at least a half dozen times, you are very likely dead inside.