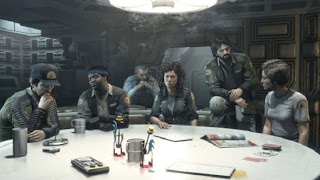 I once had a lovely cat by the name of Ripley. I love the Alien movie franchise. I love them so much in fact, that I am even a fan of Alien 3 and Alien Resurrection. Many sci-fi fans seem to think that it's ok to argue about whether Alien or Aliens is the best film of the series, but no one is allowed to enjoy the latter two of the quadrilogy.

News broke that members of the original Alien film, Sigourney Weaver, Tom Skerritt, Yaphet Kotto, Veronica Cartwright and Ian Holm, will reunite for the video game Alien: Isolation. I used to play video games a lot, now-a-days I play video games very little, but news like this none-the-less quite exciting. Even with the hindering of not quite perfect, kinda creepy, just about perfect looking human animation, I still find pop culture geek news like this very cool. Not quite as good as Sigourney Weaver returning for another movie, but hearing her recite some new Ripley dialog is still more proof that nothing is impossible in this geek ruling of the entertainment world that we all live in.

Posted by batturtle at 3:28 PM