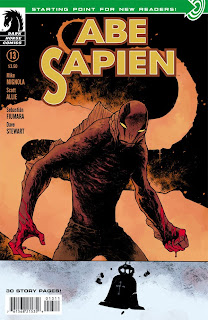 Abe Sapien is character that I have been a fan of for over two decades now. Geek times certainly does fly by. In my never ending quest to catch up on comic book reading, I read the most recent issue of his solo series last night. The Hellboy-verse finds itself in an apocalyptic state filled with giant monsters and various states of evidence that the end is nigh.

Although set within a deep continuity of X-Files like fantastical horror, these comics are pretty easy to jump into without confusion. This issue is in fact what Dark Horse Comics is branding as a 'Starting Point For New Readers'. So, worry not if this being the 13th issue makes you think that you'll be 12 chapters behind the story. Fairly simply...Abe is a former human, current gill-man (kinda like the Creature from the Black Lagoon), the world is in turmoil, and Abe is wandering around doing good. The series is written by Hellboy-verse creator Mike Mignola and editor Scott Allie, and features beautiful art from Sebastian Fiumara, and colour from Dave Stewart. You can currently pick up a paper copy from the brick and mortar shops, or had over to Dark Horse Digital to download a futuristic virtual digital edition of the issue.
Posted by batturtle at 3:28 PM