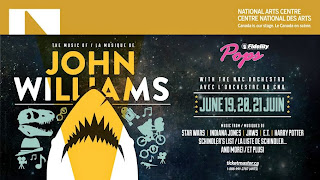 On a visit to Boston I once got to be in the presence of John Williams as he conducted the Boston Symphony Orchestra in their performance of a selection of his movie scores. That's pretty hard to top. None-the-less, the NAC Orchestra performing an evening of John Williams favourites was still pretty great.

I imagine that putting together the selections for such an event has similar frustrations to a rock band trying to put together a set list. You want to play the classics, but you want to mix things up a bit, maybe play some rarities. After thy performed the Superman theme, it was hard not to emulate Homer Simpson and yell "Play it again!". All in all, selections from Star Wars, E.T., Indiana Jones and Harry Potter and more, made it a very worthwhile night at the orchestra. I even forgave them for putting Hook into the program. I look forward to their next highbrow pop culture cross-over.
Posted by batturtle at 4:22 PM