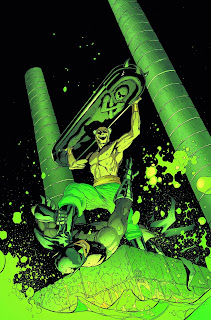 Anyone who complains that there is nothing good being published in the DC Comics / New 52 line clearly isn't checking out the Bat stuff. Grant Morrison's epic Batman Inc was great, and the flagship Batman comic from Scott Snyder and Greg Capullo is successfully defining the Dark Knight for a new generation. On the heels of Robin's death, Batman & Robin has managed to adapt itself into an excellent team-up book: Batman & Aquaman...& Wonder Woman...& Frankenstein. In the latest issue it's Batman & his greatest nemesis, the immortal tyrant Ra's Al Ghul. The issue is the conclusion of The Hunt for Robin (spoiler alert...the hunt for Robin doesn't seem to be over just as of yet).

Posted by batturtle at 3:07 PM