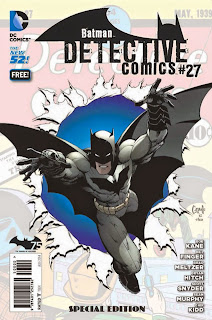 I just read the staggering news that Bill Finger will receive his first ever cover credit on a Batman comic, 75 years after he helped create the character. Bob Kane was an ok comic book creator, a brilliant businessman, and by all accounts a horrible human being. Bob Kane lied his way into being the sole mastermind creator of the biggest comic book character of all time. He took endless amount of credit for others work, and was wise enough to lock up sole creator credit with the powers that be at DC Comics of the time.

Bill Finger wrote the first Batman comic and was responsible for pretty much every important addition to the characters mythology. Bill Finger wrote the introductions of Robin, Joker, Catwoman, Commissioner Gordon, and The Penguin, along with the Batmobile, the Batcave,Gotham City, and Batman's origin. Most accounts lad to the fact that these were created by Finger with little or no input from Batman "creator" Bob Kane. Bob Kane's original Batman sketch was a guy in a red costume...no pointed ears, no cape,no Bat logo,no utility belt. Everything that we seem to identify with Batman today came from Bill Finger. Yet,his name isn't credited in comic books, animated series, video games or movies that feature Batman.

So, having Bill Finger's writing credit appearing on the special 75th anniversary (free!) Batman comic coming out in July is kind of a big deal. Maybe DC's next step is getting some smart lawyer to find a loop-hole and Bill can get his creator due for eternity.
Posted by batturtle at 2:39 PM