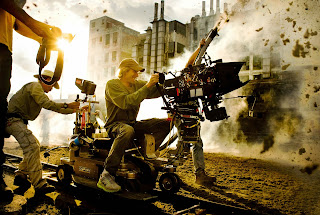 If I ask really nicely can no one go to see the latest Transformers movie this weekend? Please? No, eh? Didn't think so.

I did not like the first Transformers live action movie. I know hate is a strong word, but I really hated the second one. I refused to see the third one. It may be unfair for me to judge something I have not seen, but the film was by the same director and tam behind the first two offerings, so I think it's safe to say that this franchise is not for me. I've been told from various sources that it isn't even worth watching in a so bad it's good kind of way. That it was just painful. I think it's safe to say that the Transformers movies are the worst things that Steven Spielberg has ever attached his name to.

Despite critical trashing and seeming dislike from much of the fan-base, the Transformers movies have none-the-less made over $2.5 billion dollars. Hence, Hollywood will keep on making them,because making movies is a business and businesses like making a profit. The problem here seems to be the same thing that often happens with fans of comic books or teevee shows. Over the years I have often heard something along the lines of "I haven't liked Spider-man comics for years, but I keep on buying them because I've been reading Spider-man since I was five". Fans are guilty of supporting stuff either because they have a history with it, or just because it is there.

This weekend, in all likelihood, the fourth installment in the Michael Bay directed blurs of giant robots punching each other will make all the money. And that makes me feel many emotions...mostly frustration, sadness and various levels of anger. In a world of endless entertainment possibilities, the masses will shuffle into the lowest quality option and invest their hard earned money in in yet again. There are so many worth while movies out there right now, so much great teevee, endless amounts of reading options, or so much else one could do to fill their free time. Instead, millions of folks will shuffle into multiplexes, look at their options, shrug, and say "I dunno...one for Transformers I guess". Poor, sad, lemming like human beings. We have no one to blame but ourselves that there will be a Transformers 5, and that it will yet again be a horrible mess of a motion picture.
Posted by batturtle at 1:45 PM