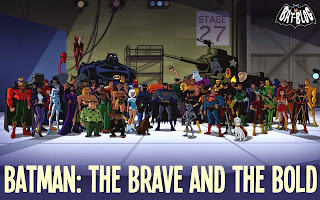 I find there's a false sense of accomplishment when you finish watching a teevee series. I think we live such busy lives, and there is such an onslaught of entertainment distraction, we are impressed with ourselves in just the act of being able to puzzle in worthwhile teevee viewing into our hectic day.

The most recent show that I take pride in having watched is the Batman animated series The Brave and the Bold. This show has a little something for everyone, no matter your level of geek. It's completely kid friendly, it's bright and colourful and fun, it's filled action and adventure, and showcases some top notch writing.

It is also jam packed with DC Comics favourites and some characters who never in a million years did I think would make it to animation. Sure, there's Superman and Aquaman, but also B'Wana Beast, 'Mazing Man and the Creature Commandos!? At the same time the show managed to have something for kids and something for die hard nerdy grown-up's. Two previous Batmen made appearances (Kevin Conroy and Adam West), along with such talents as Mark Hamill, Neil Patrick Harris, Alan Tudyk, Ron Perlman, Paul Reubans, Henry Winkler and none other than Weird Al Yankovic...to name a few.

The final episode is a wonderfully bizarre meta episode in which the mischievous all powerful sprite Bat-Mite decides that the show has jumped the shark. He's bored with it, so sets out to destroy the show so he can have some dark and gritty Bat-tales again. The ending actually got me a lil choked up.

In my youth I was all about the dark and gritty Batman of the 1980's. Any other incarnation of Batman was wrong and offensive to my nerdy ways. Now, much like my favourite writer Grant Morrison, I embrace all the different imaginings of the character. Between my love for Brave and the Bold and my renewed appreciation of what is now known as Batman 66,its even made me question if I should give Joel Schumacher's pair of Bat films another chance.

It's sad that a show like this is only given three seasons. It seems like they could have kept on telling stories from this corner of the alternate Batman universe for many years to come.

Posted by batturtle at 1:56 PM