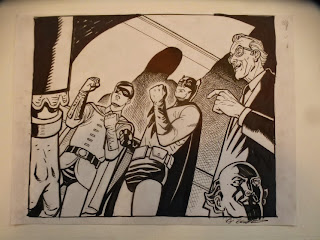 I cannot wait for the Blu Ray release of the classic 1966 Batman teevee series that is finally happening this year in honour of Batman's 75th anniversary. In the meantime, DC's Batman '66 comics will tide me over. Especially the Batman '66 Meets The Green Hornet comics featuring amazing art by Ty Templeton. Once upon a time I pushed aside any Batman that wasn't of the Dark Knight variety, now I embrace the wide spectrum of various Bat incarnations. I will be throwing money at Warner Bros as soon as they announce the brilliantly campy tee vee series official release date.
Posted by batturtle at 1:56 PM