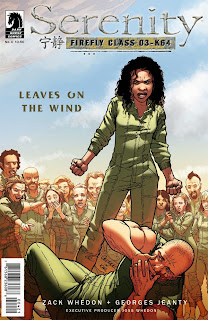 I've said it before and I will say it again...if you are a fan of Firefly /Serenity / Joss Whedon, and you are not reading the Serenity comics published by Dark Horse,you are missing out. The cries from die-hard fans of the show and movie (aka - Browncoats) for more sci-fi western adventures with their beloved characters have never stopped, even though it's been nearly nine years since the movie underperformed at the box office on the heels of the show being cancelled. As much as I would love more episodes or another movie, and we do live in an age of geek miracle and wonder, at this point I don't think it's in the cards. Joss Whedon is kinda busy playing in the Marvel universe at the moment, and I can understand it being hard for a studio to justify fronting the budget for a product that both flopped on television and in the movie box office.

Good news though! Dark Horse has so far published a pair of Serenity three issue mini-series, a one shot single issue, and a couple of graphic novels. All of the comics are executive produced or written buy mastermind creator Joss Whedon. Currently we are right in the midst of a six issue mini series titled Serenity: Firefly Class 03-K64: Laves on the Wind. The story arc is executive produced by Joss, drawn by Buffy comic alum Georges Jeanty, and written by Joss' brother Zack (who isn't just there 'cause of nepotism, he's written episodes of Deadwood and Fringe, and comics like The Terminator). If you loved the show and movie, I guarantee that you will love these comics. Click over to the Dark Horse site to get digital versions, or go visit your local comic store and they'll point you in the right direction. Issue five is currently available online or on the shelves at the comic shops.
Posted by batturtle at 10:50 AM