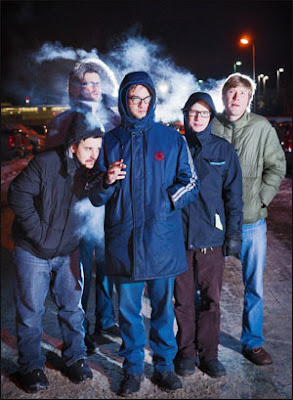 Recently I got snippy with some friend of a friend as they were trashing Ottawa as a horrible place to live where there was nothing ever to do. I told them that if they thought there was nothing to ever do in this city they weren't trying very hard to find stuff. Not only do I think there's always something to do here, often I find the cool things overlap and you have to pick over two equally worthwhile events.

I thought of this glum hater of the city that I love so as a couple nights later I went to a hip indie lil' coffee shop tucked in beside the impressive Chinatown arch as I watched a great local band perform an intimate yet still rock & rolling show. The band used in this example, The Hilotrons, are on the cover of this weeks Ottawa XPress in promotion of their Saturday night show at Babylon.

So don't be one of those whiners who inexplicably say there's nothing to do in Ottawa. Unless you have other awesome plans, get yourself out to this show to see a truly impressive local band.
Posted by batturtle at 4:58 PM