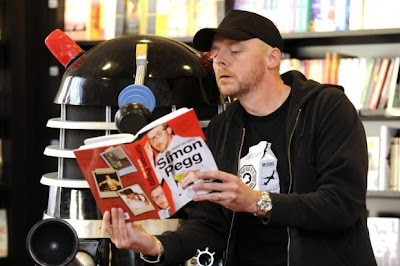 A couple days ago finished reading 'Nerd Do Well', the autobiographical story of a little geek who becomes a professional geek from one of my heterosexual guy crushes, Simon Pegg. Thought of it today as I saw a snippet of the 'Paul' trailer. Simon Pegg (along with his best of friends Nick Frost & Edgar Wright) are living the geek dream. The books through-line is all a geeks growing up evolution (with a few stories of the non-geek thread thrown in). What makes it shine is that he really seems like one of us...or to stand corrected he is one of us. With the difference that he gets to live out geek dreams that most of us will ever be lucky enough to partake in. Imagine being a kid who likes watching 'Star Trek' re-runs, and then one day going in to work and finding yourself acting alongside Leonard Nimoy while portraying Scotty. Or getting to be a villain on 'Doctor Who'. Or working with the guy who directed 'Raiders of the Lost Ark' (on a project with two of your best friends). Or being a zombie in a Romero movie. Pretty amazing truth is stranger than fiction kindah stuff.