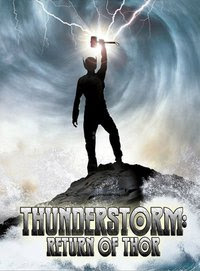 Home from work on the first night of shooting for Thunderstorm: Return of Thor. This is not of course the Thor film coming out in theatres later this year from Marvel Comics. This is what is commonly known in film geek circles as a mockbuster. Mockbusters are nothing new to the cinema world. The old monster films were ripped off over and over, in the 70's there were plenty of shark and space movies riding the coat-tails of Jaws and Star Wars. And in the 80's a plethora of wannabe Gremlins movies flooded out of the gates after its success.

This generation of mirror copy but low budget versions of Hollywood tent-pole releases are on quite the roll, so I guess someone must be watching them...or being tricked into watching them. There's one company called The Asylum that seems to hold the crown at the moment, they've done 18 in 6 years. Their fine library of titles include: The Da Vinci Treasure, The Termiators, Paranormal Entity and believe it or not, Snakes on a Train (you get one guess at what each of those were ripped off from).

It looks like the movie that I'm crewing on will even face some competition (besides for the competition of y'know, the actual theatrical release, big budget, directed by a four time Oscar nominee project). On the video store shelf, or more appropriately mayhaps to say on Netflix now-a-days, beside Thunderstorm: Return of Thor will sit The Asylum's Almighty Thor. And who said Hollywood was out of ideas?
Posted by batturtle at 3:29 AM