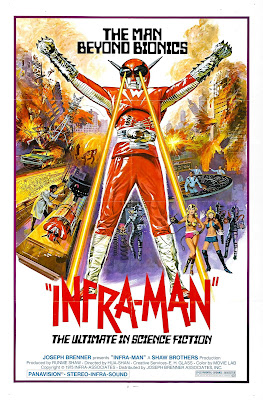 Just a quick post to remind one and all of Infra-Man, a great Lost Marbles Geek Night treat tonight at the Mayfair tonight at 9. I'm looking very forward to this Power Rangers looking 1970's sci-fi superhero vs giant monsters extravaganza. When we say we're the home of 'stuff you won't see anywhere else', we sure as damn well mean it.

I have not see the film yet, but from what I've researched, it seems to have demon princesses, witches, skeleton ghosts, a slew of monsters and front to back over the top martial arts action. We've got a bunch of Lost Marbles stuff to give away, and on top of all that it's a film that Roger Ebert thinks is extreme genius. That's the most respected film critic on the planet people!
Posted by batturtle at 3:34 PM