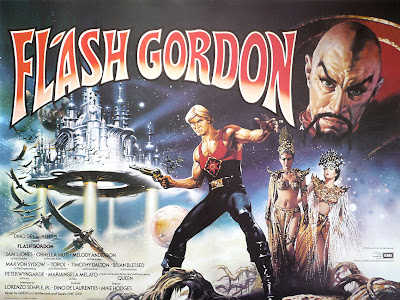 I saw Flash Gordon initially at the Renfrew Drive-In when I was a little kid. My mum or dad would take me there frequently to see many a geeky film. The first two films I ever saw were Star Wars and Star Trek: The Motion Picture, followed on other occasions by Superman II (which I'm pretty sure I saw before the original...but I'll have to verify that), The Legend of the Lone Ranger, Cannonball Run, Airplane! and various other late 70's early 80's offerings.

I have a distinct memory of being scared to death by at least one scene. Some plot plot point where Flash had to stick his hand in a hole and there was a killer spider in there or something like that (I haven't seen the movie forever, kind of blurry). I also remember thinking that it wasn't as cool as Star Wars. Which is funny, since now I know that the Flash Gordon serials and comic strips were a giant influence on George Lucas in the creation of the Star Wars saga. Not only that, evidently he initially wanted to do a big screen Flash Gordon after his successful turn on American Graffiti, but he couldn't get the rights to do so. The powers that be didn't think he was the right director for the job, considering that his previous science fiction directorial effort was the acclaimed but box office failure of a movie called THX 1138. There are many an article on the subject, but I found the one on Star Wars Origins fairly informative and comprehensive.

The most famous part of the film is of course not the script or behind the scenes talent or special effects or actors...but that it has a score from British rock and role icons Queen (one of only two films they did so for, the other being the original Highlander). A powerful over the top musical turn, accompanied by some pretty on the nose Saturday morning caliber lyrics along the lines of "Flash! He'll save every one of us!"

Find out if Flash Gordon can indeed save us pathetic earthlings at the first of four sci-fi themed Lost Marbles Geek Nights for the month of January, Monday the 10th at 9:15pm at the Mayfair Theatre
Posted by batturtle at 11:49 AM