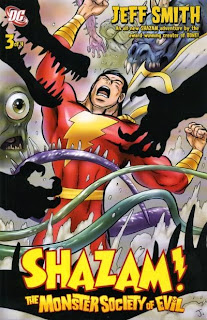 My girlfriend has a couple of her family members visiting. Amongst all museum and gallery visits, her little six year old cousin was excited to go and checkout a comic book store, and we did so today. He got an Adventure Time comic and a Darth Vader necklace and asked many a question about all the geek lore on th shelves around him.

We also picked him some treasure from the 50 cent bins. Sadly, out of a table filled with a dozen of more long comic boxes, it's quit difficult to find stuff that is kid friendly. We live in a world where most people reading comic books are middle aged. So, that product has skewed over to appeal to that customer base. After lots of digging though, we managed to find an issue of Teen Titans Go, Pet Avengers, Amelia Rules, a Spidey, and a couple issues of Jeff Smith's Shazam. Her little cousin looks at these books like they are the world's greatest treasure, even if they are only parts of the over-all story, even if they aren't in mint condition, even if thy are only worth 50 cents. Even though comic book characters thrive on the big screen, on teevee, and in video games...we should never forget that comic book characters are best served in comic books. As long as kids like this one still want to read comics, there is hope for the future.
Posted by batturtle at 3:21 PM