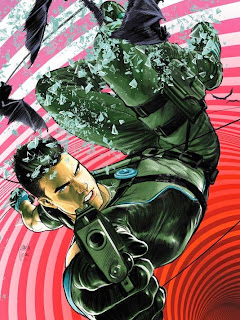 I'm a bit upset that the fate of Nightwing has been spoilered thanks to a press release in regards to the upcoming DC Comic titled Grayson. That's always the issue with reading a shared universe continuity like that of DC Comics. I'm sure that they don't want to upset readers and ruin endings of storylines...but they also have to advertise upcoming books. Currently, the original Robin'slife hangs in the balance in the Forever Evil series that is about to wrap up. Having just recently killed the most recent Robin, I had a feeling that they wouldn't be crazy enough to off another one...but you never know in the soap-opera like world of super-hero comic book storytelling.

So, Dick Grayson will live on to fight another day, but the moniker of Nightwing will not. It looks like Dick's resume will expand from circus performer, Robin, Teen Titan, and maybe cop (not sure if that carried over to The New 52 universe reboot), to now include super spy. Now, if the impending return of Damian Robin rumors come to be true, it will be happy days for Batman's 75th anniversary indeed.
Posted by batturtle at 4:36 PM