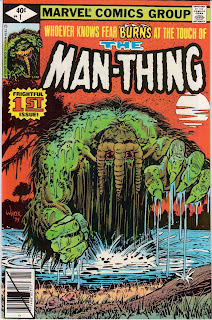 Went to a good ole' fashioned, free to get into, flee market style, held in a community centre, Sports Card and Comic Book convention. It was about 75% sports cards, of which I have no interest in. Except I'm kicking myself for not remembering to try and find the baseball card of Carl Yastrzemski with the big sideburns that Milhouse wanted. I did stumble onto my most favouritest of thing to find at such a gathering, cheap bin comics. Better then even dollar comics or finds from the 50 cent bins, these ones were a mere 25 cents a piece. Got a batch of 1970's treasure including issues of Aquaman, Flash, Justice Society, World's Finest, Superman Family, and Man-Thing...16 comics for a whopping four dollars. I almost feel bad for ripping the guy off. Almost. Then I look at the awesome cover for Man-Thing #1 and I feel better.
Posted by batturtle at 6:53 PM