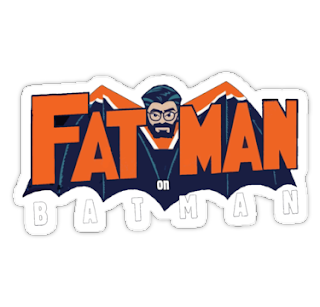 I admit that I am not a card carrying member of the Kvin Smith filmmaking fan-club. I really loved Clerks when it came out in the day, and then things went a bit down-hill for my taste after that. Then a couple years ago Kevin announced that h was retiring from filmmaking after Red State. Which I ended up really liking too. So, he was retiring just after I thought h had finally become a real filmmaker and broken out of the slacker Silent Bob mold. His retirement lasted about as long as Jay Z's did, he now has three films in the pipeline in various states of development.

Despite my neutrality to his movie making, I have always thought that Kevin Smith has known how to tackle the skill of public speaking and being a good interview subject and DVD audio commentary participant. He has puzzle-pieced these skills together to become quite the internet corner-stone with his always building podcast empire.

I'm always looking for new podcasts to listen to. I'll find one that I like and just marathon through libraries worth of episodes. I never listen to music anymore in my hadst wearing time, it's all podcasts all the time. I've delved into a Kevin Smith hosted show for the first time with Fat Man on Batman.

As you might guess, this podcast focuses on Kevin Smith talking about his favourite fictional character with Batman related actors and creators and fans. So far I've listened to episodes featuring animation masterminds Paul Dini and Bruce Timm, Batman voice-actors Kevin Conroy and Diedrich Bader, 1960's Bat-icon Adam West, and Jedi Master and greatest Joker ever - Mark Hamill. I'm a giant Batman geek, so not so surprisingly, I really like the show. It's not just completely Bat-centric though, conversations weave into talking about all kinds of other stuff that happen to come up around the theme.

I can do without the familiar x-rated humour that a Kevin Smith dialogue always circles around. I fast forward through the rather annoying Kevin Smith sung 'snoochie boochie'-esque opening intro and theme song. Besides for those complaints, Kevin Smith is an intelligent and passionate host and this is a worthy tribute to a character that happens to be my favourite as well.
Posted by batturtle at 3:35 PM