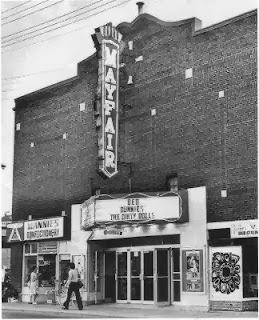 Some eagle eyed patrons may have noticed some intriguing new information while looking at the March schedule poster that went up on display yesterday at the Mayfair.

In the words of the great Douglas Adams...Don't panic!

There is a big change upcoming for the Mayfair Theatre, but it is not a change to fear. Starting next month, the Mayfair will switch up to weekly scheduling instead of a monthly schedule format.

The bad news, for the first time since the late 1970s (when more adult fare was being showcased at the theatre), you won't be able to magnet a Mayfair program to your fridge. What's the good news?

This means that we can book week to week and hence can bring in new mainstream and new indie movies much faster. There have been numerous times that we have missed out on on booking a new movie sooner, or sometimes missed out on a getting film all together. We haven't just missed out on Hollywood movies repeatedly, but also genre cult type stuff. All this was due to schedules being set in stone sometimes six weeks or more in advance.

Other popular Mayfair style theatres successfully program in a similar manner without a monthly schedule. So, just because of the change, this doesn't mean we will miss out on continuing to screen movies that you've come to love seeing at the Mayfair. Programming new movies faster doesn't hinder the likes of The Room, Rocky Horror, Saturday Night Sinema, Christmas classics in December, Halloween fare in October, Saturday Morning Cartoons, and movies from local filmmakers (etc...) from gracing our screen.

All of our scheduling information will be available on our website, Facebook and Twitter, and listings will of course still be available in Ottawa newspapers. We'll soon have information available about signing up for our e-mailing list if you are interested in getting programming updates in such a manner.

I am very excited at the programming possibilities that this will open up. I am confident that our fine patrons will not be disappointed.
Posted by batturtle at 12:10 PM