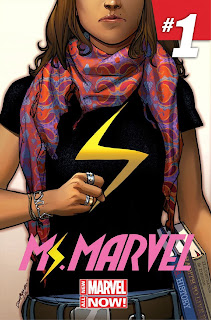 Marvel Comics at it's worst can be pretty guilty of some sub-par representations of their women characters, like when a female hero wears g-strings instead of pants while they battle evil. The company is also extremely guilty of endless money gouging cross-over's and of giving popular characters numerous titles titles that dilute the talent and the story-telling possibilities. It wouldn't be so bad if the crossovers and spin-off's were good...more and more they leave me very unimpressed. I've actually pretty much given up on most of Marvel.

Sneaking through the shockingly uneventful world ending crisis events and the 473 Avengers and X-Men books a month, the good news is that a handful of great books still manage to sneak through. FF was great. Hawkeye is great. And, I'm pretty sure after having read the first issue of the reinvention of Ms Marvel, that this series has potential of greatness.

The new Ms Marvel is a feisty imaginative Muslim Pakistani-American teen living in New Jersey. She is set firmly in the Marvel universe, and to top of the daily troubles of her teen existence, she now finds herself with super-powers and in a costume similar to her favourite Avenger. The series is drawn by Adrian Alphona, veteran of one of my favourite comics ever, The Runaways. Writing duties are handled by G.Willow Wilson, writer of Vertigo's Eisner nominated series Air.

Ms Marvel is on of those critically acclaimed, fan favourite kind of books that usually seems to cling on the cliff of cancellation for its entire run. I hope Marvel makes enough money off all those crossover's and merchandising to give this one a chance.