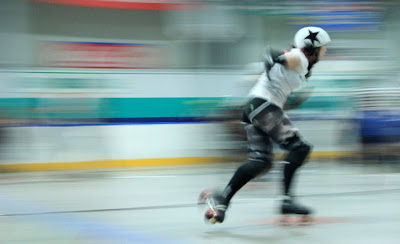 This weekend the RVRG (Rideau Valley Roller Girls) kicked off their home season with what they dubbed a 'Coaches Pick' bout. Essentially an all-star game style event with girls from the league split up onto different teams. It is late and I'm tired and even though I worked as a score catcher at the event, at the moment I totally forget the score. I do know that team white came from behind and racked up a whole bunch a points to take the victory. I wasn't really cheering for either team (since they were all from my favorite Ottawa teams), but none the less enjoyed watching a great bout. You would think that the ladies might tone it down a notch since it was a inter-league team-mate vs team-mate event. They did not. They played as if it were the championship finals. I flinched a number of times while witnessing a hard knock down or wipe out. Looking forward to the next game in June. I wish there were more. And why isn't derby on tv? The sports channel plays poker, but not derby!? Madness.
Posted by batturtle at 12:10 AM