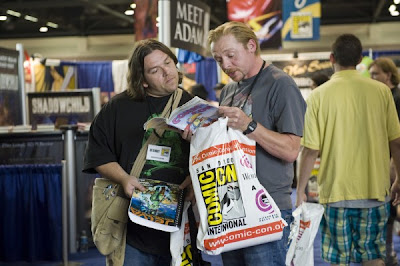 A couple of months ago, Simon Pegg and Nick Frost produced one of the funniest things ever to appear on the interwebs, the failed attempts of a shot-for-shot remake of the Star Wars trilogy. It was smart, and hilarious, and wonderfully geeky. Those three things are more-or-less the cornerstone of the calibrations of these two gentlemen when they work together actually.

Watch any of the three projects that they've done with director Edgar Wright (Spaced, Shaun of the Dead, Hot Fuzz) and you with see all three of those descriptive traits. If you do not like any of these said projects, we cannot be friends. Harsh and irrational I know, but opinion on such matters are deal-breaker in nature for me.

The latest project from Nick and Simon will soon come to the Mayfair, titled PAUL, it breaks away from their frequent collaborator Edgar Wright. He was off busy directing my favorite movie of 2010, Scott Pilgrim vs the World. So the lads went off and had their film made by the director of Superbad and episodes of Arrested Development and Undeclared (impressive stuff all around).

The plot of PAUL? A couple of geeks from the UK stumble on an on the run alien after heading out from the San Diego Comic Con for a cross country U.S.A. road trip. Comedic amount of chase filled action and adventure ensues, along with a whole buncha comic book and Star Wars references.

The Mayfair presents a Lost Marbles Geek Night of PAUL: Monday May 16th at 9:15pm, with an encore screening on Tuesday May 17th at 9:00pm.
Posted by batturtle at 10:51 PM