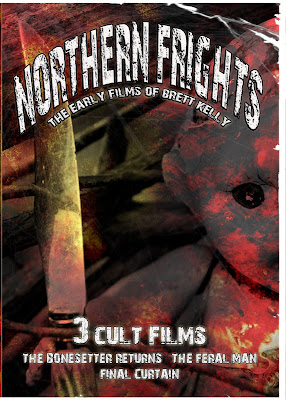 Indie cult director Brett Kelly (My Dead Girlfriend, Prey for the Beast) is maybe one of Canada's most prolific independent filmmakers. Brett has directed no less than eighteen feature films and has quite a few more projects on the way. I myself have worked on pretty much all of Brett's bazillion projects (well, more like eighteen or so I guess).

Brett Kelly Entertainment recently announced the release of a two disc, three movie set of some of Brett's earliest work titled NORTHERN FRIGHTS: THE EARLY FILMS OF BRETT KELLY. The set includes Kelly's first feature film, the lycanthrophic FERAL MAN (2002), the slasher/mystery FINAL CURTAIN (2004)and the boogeyman tale BONESETTER RETURNS (2005). The DVD set includes commentary tracks, behind the scenes footage, interviews and more. NORTHERN FRIGHTS shipped May 1st (I'm way behind in some of my blog notices as per usual, meant to bring this up earlier) and can be ordered directly from Brett's website at www.brettkelly.net
Posted by batturtle at 11:40 PM