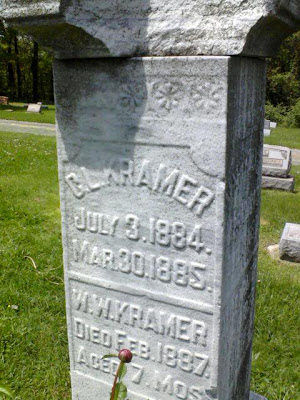 On the heels of my Night of the Living Dead related travelings, an article from the Centers for Disease Control and Prevention in the States came to my attention. Believe it or not, the topic of the piece was Preparedness 101: Zombie Apocalypse. Who could ever have guessed that the CDCP was so awesome!? I hope that some people stumbled on this article, read it, and actually thought that the end was upon them, War of the Worlds radio-play style misunderstanding in full effect.

Also, I just noticed that the gravestone that I was so excited to see is actually for not one but two infants. Makes it seem even more inappropriate and morbid to take pictures and be in awe of such a thing as a movie prop. I hope that the lil' 1800's Kramer ghost babies understand that I mean no disrespect and do not haunt me.
Posted by batturtle at 4:04 PM