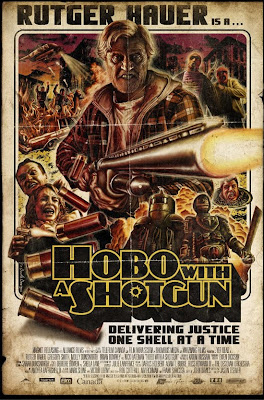 I love it when you tell someone about a movie and it is so out there that the person doesn't even believe that you're telling the truth and thinks the thing is made up. Hobo with a Shotgun has been one of those movies for me the past lil' while. I've told a number of folks about it who all basically said in return, "That's not a movie!". Clearly these people aren't keeping on top of their geek studies. This film is not only a new Canadian cinematic classic, it also holds the honour of being the project that graduated from being a fake trailer contest winner for the Rodriguez / Tarantino mega Grindhouse double bill.

You can witness the madness that is Rutger Hauer playing a shotgun wielding homeless person fighting evil in the streets of Halifax on Monday May 30th & Tuesday the 31st at 9:15pm at the Mayfair as part of Lost Marbles Geek Nights.
Posted by batturtle at 11:31 PM