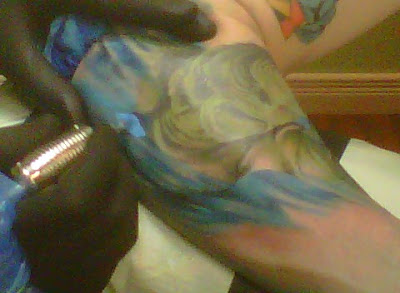 I do enjoy the concept of the blog, despite thinking that the name itself is kind of stupid, and that I'm sure there's roughly 875,000 bad ones for every good one. I'm not even sure how I started up with this specific blog, I guess to spread the word about some Batturtle short film productions. Then more recently it became mostly talking about Mayfair stuff, and then after that about roller derby bouts. Mainly just stuff I like and participate in.

Lately, strangely enough, I've been actually getting compliments on the blog writings. From friends that makes sense, as they know who I am and might check in on this thing every once and a while. But then I got some praise from a complete stranger. Which is nice of course, but I can't fathom anyone reading about cool Mayfair movies that are upcoming and having any interest in it. I will take the compliment though.

It sparked in my brain that I've been meaning to do more frequent writing (which I haven't been doing too poorly at lately), and having more diverse writing topics. So, at the top of this entry you'll see a not too great, rather grainy photo (not the photographers fault, it was taken from a cel phone) of the pain in progress that is my latest tattoo. As I type along currently, I do so with outstretched arms akin to the Universal Monsters era Mummy. Funny that, since it's the ink of the Universal Monsters character Creature from the Black Lagoon that has caused this inconvenience to my right limb.

A couple years ago I had no tattoos, now I have six-ish. I'm a little bit of a late bloomer in the being tattooed game, and have a slight sense that I want to catch up and get finished off in a shorter amount of time. Not that I'm rushing into anything or just randomly picking designs out of a book (no Tasmanian Devil or flaming skull here). Each design has meaning, has been thought through, and I think looks rather cool (luck and chaos theory attached me to an excellent artist). Each design is also terribly geeky. I might look bad-ass from afar, but on closer inspection it is easily revealed that I am a giant fan-boy of a geek.

I am definitely not the type of person that one might call tough. I have hands like a princess and have never thrown a punch or been on the run from the law. Inexplicably though I can handle the pain of a tattoo. My first tattoo was an arm-band, and I got nice praise from tattoo guys in the shop about my ability to have that done to me and not having to take a break or scream and writhe in pain. And, as everyone says, they are indeed addictive. So far I'm lucky, and all my ideas will fit accordingly on my two arms (though even that initial boundary has been broken a little bit).

Creature needs a bit more work. That will be followed by a Star Wars motif and then finishing off the Doctor Who outer space theme (with TARDIS and all) that is also in progress of completion. And believe it or not it only gets more geeky from there.
Posted by batturtle at 5:19 PM