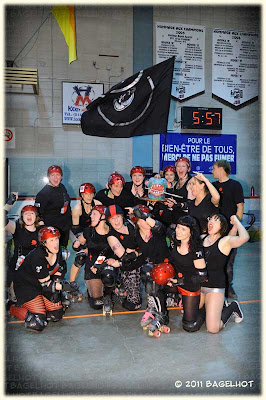 Over the past couple years I've found myself slowly caring less and less about the game of hockey. Very unpatriotic, I know, but it has happened none-the-less. This turn hasn't happened because the Ottawa Senators went from being a great team to a playoff missing team, I'm not jumping off a band-wagon. I went to three games in the 2010 / 2011 season, 2 games that I won tickets to and 1 that was a birthday gift. I had a good enough time at each of the games, but continued to find myself just really not caring.

I used to care about hockey. I used to care a lot. I would watch games under great amounts of stress, holding my breath and coming out the end either ecstatic or in the pits of despair depending on the outcome. And I couldn't figure out why I stopped caring. I think it was a lot of things. I got jaded as to millionaires playing a game that kids like to play, I hated how players swapped teams so often that you lose track of who plays for who, and I know I got tired of people from other cities (I'm looking at Montreal and Toronto specifically) wanting to argue with me and being disparaging just 'cause we liked different logo's.

Then I realized what it really was that tore me away from a life long passion for hockey watching. It was roller derby. It was totally roller derby. A couple years ago roller derby came to Ottawa. I was very excited, having fallen in love with roller derby after having been hooked on an A&E documentary series from a few years back called ROLLERGIRLS. I went to the first bout that the RIDEAU VALLEY ROLLER GIRLS held here in Ottawa, and haven't missed a home bout since.

Soon after we started a tradition of showing Roller Derby themed movies at the Mayfair that the RVRG's presented. We've shown documentaries and stuff like Kansas City Bomber and Switchblade Sisters (which has an excellent climactic gun battle in a roller derby rink). I've even gotten involved on doing ref crew stuff, and now I find myself friends with a bunch of roller derby ladies.

So, to finally get to the point here, last Sunday in Montreal my Slaughter Daughters won the Beast of the East tournament in Montreal. Quite the accomplishment indeed, and I watch via the magic of the interweb while wearing my Slaughter Daughters shirt and matching red Converse. I don't know what the world record is for holding ones breath is, but I'm pretty sure that I broke it. Then, when the girls managed a stunning come from behind upset victory, I leaped to my feet, knocking over my chair and scaring the hell out of my cat. You can relive the glory (I'm pretty sure the greatest moment in sports history I thinks) thanks to the YouTube below.

Looking very forward to the home opener bout on May 28th.

Posted by batturtle at 6:50 PM