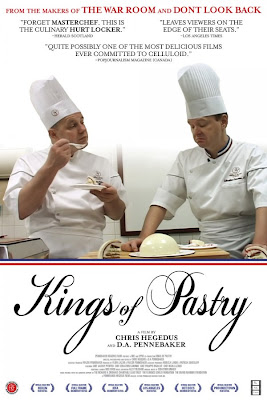 Monday nights screening of the impressive documentary 'Kings of Pastry' was excellent times all around. We got a great turnout, especially for a cold Monday night thanks to the power of the fan-base of Auntie Loo's. Even more-so impressive considering that the film recently played at a certain other Ottawa repertory theatre, and when that happens more-often than not we don't get the opportunity to screen the film as well. So when a great crowd comes out for a movie that played elsewhere recently, it of course makes us look like a viable option to film distributors (as also happened with 'Exit Through The Giftshop').

On top of the good film watched by a welcome and enjoying themselves audience, we also had not only cupcakes for sale from out friends at Auntie Loo's, we had free stuff from our friends at Auntie Loo's! You may have thought that you had a decent cupcake or two in your time, but if you haven't had one of these your life might be unknowingly sad and incomplete.

So make yourself a happier person and don't miss cupcakes and the encore Mayfair screening of 'Kings of Pastry' as presented by Autie Loo's Treats on Wednesday February 2nd at 7pm at the Mayfair Theatre.
Posted by batturtle at 11:39 PM