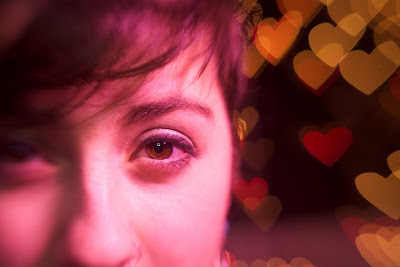 This-afternoon I'll venture out to my friend / editor / cinematographer's place to finalize the cut for my latest directorial effort and first short for the Painted Lips & Lolly Licks sexy film fest at the Mayfair. Last year I was a mix of too sissy to participate and didn't have a really decent idea. Since all my other stuff has been horror or sci-fi themed in recent years, I didn't want to mix up genres, I didn't want it to be about vampires or in a zombie world or anything like that.

As luck would have it, late last year while sitting on a bus reading a Japanese comic book and minding my own business a quick little interaction happened that made not only a great lil' story that I'll get to tell for the rest of my life, but inspired some film-making. That real life story adapted into a sexy short film idea, and as luck would have it one of my partners at the Mayfair holds the aforementioned sexy short film festival every year. So there you have it.

Now, what happened in real life and what happens in the short has gone through some rather drastic re-writes (well, I didn't actually write anything down for this one since it was a relatively easy chain of events with little in the way of dialog). It's about as close to a true story as 'Social Network' is I think. Hence my initial idea of calling it 'Based On A True Story' has switched titles to become 'Kinda True'. Due to the last minuteness of this whole thing and my rather insane schedule, I've dropped the ball on tracking down a piece of music needed for a rather integral scene. My editor made use of a song that we don't have permission to use, just to have something to pace the editing to. I'm insanely in love with the music that we can't use. And since the screening is in less than a week and the short isn't finished yet and the deadline was two days ago, I'm going to make use of the song for the screening. I'm relatively sure that it won't end with me serving out a jail term. After that, we'll replace the score with something equally cool but less law breaking.

So, for one night only (on Friday February 11th at 9:30pm), come on out and watch me break the laws of copyright infringement at the Mayfair Theatre. Please attend, just don't tell anyone what I just told you.
Posted by batturtle at 11:39 AM