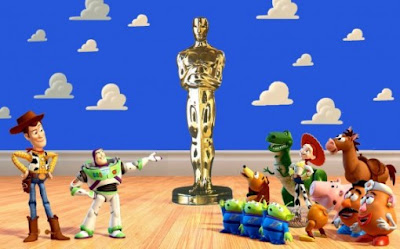 I don't care about the Oscars. And yet, like any film fan, I find myself talking endlessly about the Oscars. For me it pretty much comes down to the old and often brought up point of view that it's ridiculous to award something that is subjective. No one ever agrees unanimously on what is the best film, how can it be given an award which states that it is the best of the year then? I understand why people like giving or receiving awards, but I just can't wrap my mind around the process. I remember one year the two critics in Entertainment Weekly each did an article on their top 10 and bottom 10 picks of the year. One critic had a film on their top 10 list that was on the others bottom 10. To me, that really wraps up how silly critics and awards are.

Having said that, let me now talk about the Oscars some more! There's 10 films in the best picture category, I have seen five. I was neutral on 'Social Network' and 'Inception', thought '127 Hours' was good and that 'Winter's Bone' was pretty great. I missed seeing 'The Kids Are All Right' when we had it at the Mayfair, and will see 'The Fighter' (which kida' just looks like another 'Rocky' to me) and 'The King's Speech' in March, and I think we're getting 'Black Swan' (which I've heard conflicting reports that it is the best thing ever and horrible pretentious film school snobbery) later. I'm dieing to see 'True Grit', and only missed out on it 'cause I avoid those pesky multiplexes for the most part.

That leaves 'Toy Story 3'. Of the ten options, I think 'Toy Story 3' is hands down the best film on the list. Pixar just blows my mind. Any other franchise or studio would've dropped the ball by the time they get to part three in a series. And those mad geniuses at Pixar almost inexplicably makes another story about talking toys that manages to soar above any other offerings not only of the summer but the whole damn year. Yet, I think that most folks think 'Social Network' is gonna' win. And that movie being considered the best perplexes me to no end, but I'm in the minority there.

But none of it really matters because my favorite movie of the year was 'Scott Pilgrim vs the World', and it got zero nominations, and that doesn't make me care about it any more or less.

Though I don't care about the Oscars, I will kinda be watching them. In the capacity that we'll be again showing them on the big screen at the Mayfair. Likely I will be on ballot counting patrol again. Which last year came down to the very last award given before we had a winner, it was actually fairly action packed to keep track of. Plus, James Franco is co-hosting and he's pretty awesome.

Oh, and there's a slim chance that Banksy might do something awesome (again...don't care, won't think the film is any less great, but I really want him to win).
Posted by batturtle at 12:15 AM